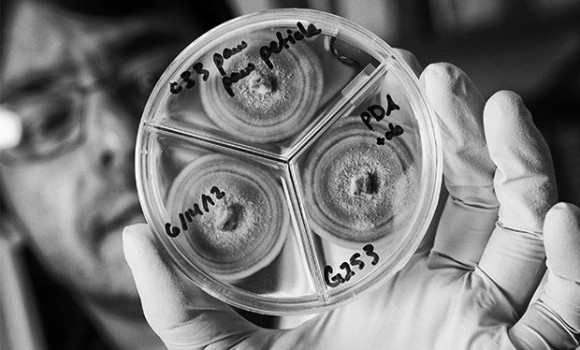 Huzefa Raja and Nick Oberlies are, to borrow a biological term, symbionts.

Raja, a mycologist, and Oberlies, a natural products chemist, depend on one another to get the whole picture of the fungi they study: Raja isolates and cultivates axenic, or pure, fungal cultures in the laboratory; Oberlies studies the chemical properties of those fungi in hopes they can lead to helpful naturally-derived drugs.

“We haven’t even begun to find the best fungi out there,” says Raja, a native of India who signed on to work in Oberlies’ lab on the fourth floor of the Sullivan Science Building after completing his PhD at the University of Illinois at Urbana-Champaign.

Fungi are the second most hyperdiverse kingdom of life out there, Raja says. Only insects show greater diversity.

Estimates put the number of fungal species at anywhere from 1.5 to 5 million. Raja says climate change and destruction of habitats could lead to fungal species extinctions, which may also lead to the loss of potential lifesaving compounds produced by fungi.

Oberlies and Raja, who work together the Department of Chemistry and Biochemistry, are a rarity as most chemists and mycologists, biologists who study members of the kingdom fungi, collaborate from separate labs at separate universities. Their field is a hybrid, cross-disciplinary science that they have termed chemical mycology.

The two scientists are studying the fungal endophytes that grow inside plant tissues of goldenseal and milk thistle as well as numerous freshwater fungi found in lakes, ponds and creeks, including the creek near the School of Music, Theatre and Dance. Raja isolates the fungi from leaves, stems and even submerged sticks.

The fungi are then grown on rice cultures for isolation of natural products by the chemists. The rice provides basic food for the fungi, which recycle carbon.

“We don’t want our fungi to be couch potatoes,” Oberlies says. “We want them to train and stay in shape. Thus, we force them to decompose rice for their food source, instead of giving them all the sugar and other nutrients they need to survive. In this manner, they remain, at least we hope, more like fungi in the wild, which produce bioactive compounds to ‘fight’ for their turf in the world.”

Not only can medical science benefit from the compounds produced by fungi, Raja says, but also the implications are great for industry and agriculture. Think of the potential for beer brewers and cheese makers, not to mention farmers who need to know how unseen fungi in grasses might affect their livestock.

“There are very few of us (mycologists) out there and we have a lot to work on,” says Raja, who also trains undergraduate and graduate students in basic mycology. “We need to pass on that expertise to future generations.”