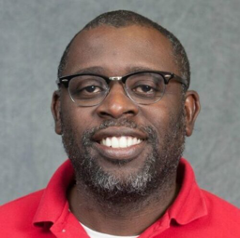 Elon is a citizen of Trinidad and Tobago and the United States. He received his B.S. degree (Kean University) in 1999 and conducted undergraduate research in organic synthesis and computational chemistry under the direction of Dr. Dale Vitale. In the fall of 1999, Elon moved to the University of Florida where he began his Ph.D. studies under the mentorship of Dr. James Boncella. He received his Ph.D. in Organometallic Chemistry in 2004, and then moved to West Lafayette Indiana to pursue post-doctoral studies in the labs of Dr. Mahdi Abu-Omar. In the fall of 2006, Elon began his independent research career in the area Catalysis/Organometallic Chemistry at North Carolina State University. He received the ORAU Ralph E Powe Award, in 2009, the NSF CAREER Award in 2010 and was named an Organometallics Fellow in 2012.

The design and discovery of new catalysts, or new catalytic transformations, is critical for the efficient utilization of our natural resources.  The aim of our work is to develop catalysts that contain a rhenium—ligand multiple bond. In our approach, we utilize five-coordinate square pyramidal complexes with a terminal multiple bond to a heteroatom in the apical position, and take advantage of the electronic consequences of this geometric arrangement to develop catalysts for the activation of small molecules. Specifically, we describe the development of new types of catalysts involving transition metal oxo/nitrido complexes where oxo/nitridorhenium complexes interact with Lewis acids to generate, upon thermal activation, a new type of frustrated Lewis pair, (FLP) where the transition metal oxo/nitrido complex acts as the Lewis base component. These new FLPs are effective as catalysts for catalytic hydrogenation, and involve a new mechanism for substrate activation by a transition metal complex where the metal does not directly participate in substrate activation, but instead plays an ancillary role.