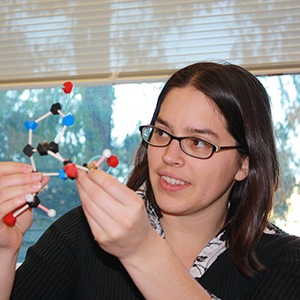 In sophomore organic chemistry, everyone learns about epoxidation – a reaction in which an oxygen-atom is formally added across an alkene/olefin. This is an example of a broader class of reactions known as atom-transfer process, and in epoxidation, an oxygen-atom is the atom that is “transferred” to the olefin. An analogous process involves addition of an atom across a carbon–hydrogen bond such that the carbon–hydrogen bond is formally replaced with a new carbon–oxygen bond. This type of atom-transfer process has broad potential: it includes reactions to replace C–H bonds with carbon–oxygen, carbon–sulfur, carbon–chlorine or carbon–carbon bonds. In short, these atom-transfer reactions are powerful technologies to streamline access to health-relevant small molecules.

Over the last decade, some of the most important advances in atom-transfer have originated from new platforms to control the site of a reaction – to selectively replace a targeted carbon–hydrogen bond in a molecule, without affecting 10–30 other pendant carbon–hydrogen bonds. Still, the utility of known C–H functionalization processes remains constrained by incomplete positional control in these reactions. This talk will focus on a novel hypothesis-driven strategy to control the position of atom-transfer. This approach has the potential to substantively extend the synthetic utility atom-transfer reactions. The physiochemical basis for reactivity and positional-control will be discussed.