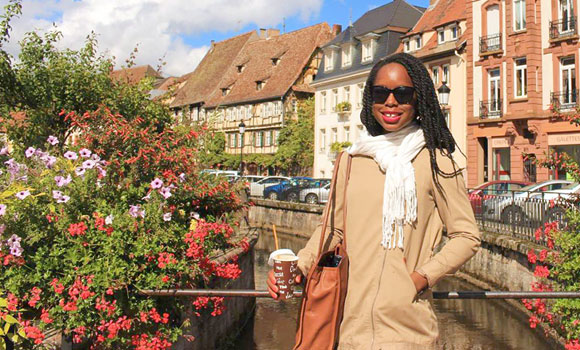 As a junior in high school, Tyra Callaway began her college search with one non-negotiable requirement in mind: undergraduate research.

She didn’t just want to work in a lab as a junior or senior. She wanted real-world, hands-on research experience as soon as she stepped foot on campus. Which is exactly why she ended up at UNCG.

“When I was applying to UNCG, I saw that research was a huge focus on the campus,” Callaway said. “The small department sizes allowed for better access to high level faculty.”

As a freshman, Callaway started in a computational chemistry lab, working closely with Dr. Patricia Reggio, professor and head of the Department of Chemistry and Biochemistry.

“I assigned Tyra a project that I would have typically assigned to a master’s student,” Reggio said. “I thought she would work on the project for two years. Instead, she successfully completed the project in just one semester.”

Now a junior honors student majoring in both chemistry and physics, Callaway is conducting research in a theoretical chemistry lab at the University of Stuttgart in Germany. Specifically, she’s using chemistry, math and physics to study the autoxidation of tetralin, a hydrocarbon molecule, and determine why the reaction travels at such a fast rate.

What’s even more impressive is that all of her research and coursework is conducted in German, not English.

“Medicine is an international discipline – diseases have no national boundaries,” Callaway said. “Understanding German in an academic context allows me to communicate with and read the journals of surgeons and scientists around the world.”

Callaway has always had an interest in studying abroad in Germany, which is why she started taking German courses during her freshman year. She plans to pursue a minor in German in UNCG’s Department of Languages, Literatures and Cultures.

“The language is so special because of the culture it represents,” she said. “I love German culture. The people are curious, helpful, kind and disciplined.”

This past fall, Callaway was awarded a scholarship by the German Academic Exchange Service, a publicly-funded independent organization of higher education institutions in Germany. The scholarship is highly competitive, with an acceptance rate of just 20 percent.

“The scholarship has opened a lot of doors for me,” said Callaway. “It allowed me to come to Germany early, and I’ve made connections with so many other fellow scholarship holders.”

Callaway will return to UNCG as a senior in August, and she has big plans for her future.

“I’d like to return to Germany and pursue a master’s degree in physical chemistry or physics,” she said. “After that, I’d like to get my doctorate in computational chemistry, focusing on something that’s neurologically-based.”